Cover of the first issue of the Frauenzeitung. This women’s paper promoted communication among distant groups, and the editorial board rotated from one city to the next.

At the beginning, the logo of the new women’s movement was a raised fist smashing the (Venus) women’s symbol—which symbolized breaking out of women’s assigned roles. The fist pointed to our background in leftist politics. It underlined the dynamism and vigor of the movement, whose forms of action were often highly physical. Within a few years, however, the militant fist disappeared from the logo, and what remained was only the biological symbol.

The Berlin women’s center naturally offered abortion counseling from the beginning. The addresses of recommended doctors were passed on. Since abortion was banned in Germany until 1974, women from the abortion rights groups organized trips to abortion clinics in Holland. These “Holland trips” helped the women concerned, but also made a political statement by at once denouncing and circumventing the abortion ban.[i]

Since the churches distinguished themselves as the most vehement opponents of reforming abortion law, it was high time that we women officially left the church. In order to let the churches know why we were leaving, we went to the necessary offices in groups. See the illustration from Frauenhandbuch Nr. 1 in the chapter Bread and Roses [da ist kein Bild über Kirchenaustritte, nur eine Erwähnung in einer Liste]

The purpose of (genital) self-exams was for women to gain knowledge about how their own bodies functioned so they would no longer be at the mercy of the medical profession. An outgrowth of this movement was the founding of the Feminist Women’s Health Center in Berlin in 1974.

The first time the media reported on the miserable conditions in Berlin’s women’s prison was in 1973, when the women’s center held a one-week, public hunger strike to draw attention to them.[iii]

We sprayed West Berlin with the word “Karman” mainly in order to propagate the aspiration method of abortion introduced by Karman. The focus was less on the meaningfulness of the action, however, and more on the thrill of being out at night together.

The women’s center made itself heard with sit-ins, especially at a medical convention and at the local television station Sender Freies Berlin. See the photos in the chapter Abortion/Gynecology (1973–75).

We activists of the early women’s movement rarely organized demonstrations. Once there was a demo against the anti-abortion law Paragraph 218 because we wanted to show how many we were, together with the critical doctors and the Communist League of West Germany (KBW).[iv]

The Berlin women’s center refused to participate in ritualized marches like the ones held on May Day. We deliberately did not take part, instead using the day in 1973 to occupy Richardplatz, a square in Neukölln, for a neighborhood festival together with a local district group.

We used the method of the demonstration when we wanted to respond quickly. In those cases, we did not bother to set the route in advance and submit it to the police for permission. We used phone trees to let women know and then just set off. This happened in cases of rape where the victim died, for instance. We gathered at the crime scene and spread out through the neighborhood, with the blue vehicles of a helpless police force in tow. They were helpless to respond because these mass gatherings were illegal, but we didn’t destroy anything or attack anybody and were also protesting a crime. These women’s demos took place at night, and were not typical walking demos. We carried torches and sometimes played music and often sprinted. They were dynamic events! And they were the origin of the Walpurgis Night marches on the evening before May Day, which have in turn become rigidly ritualized. 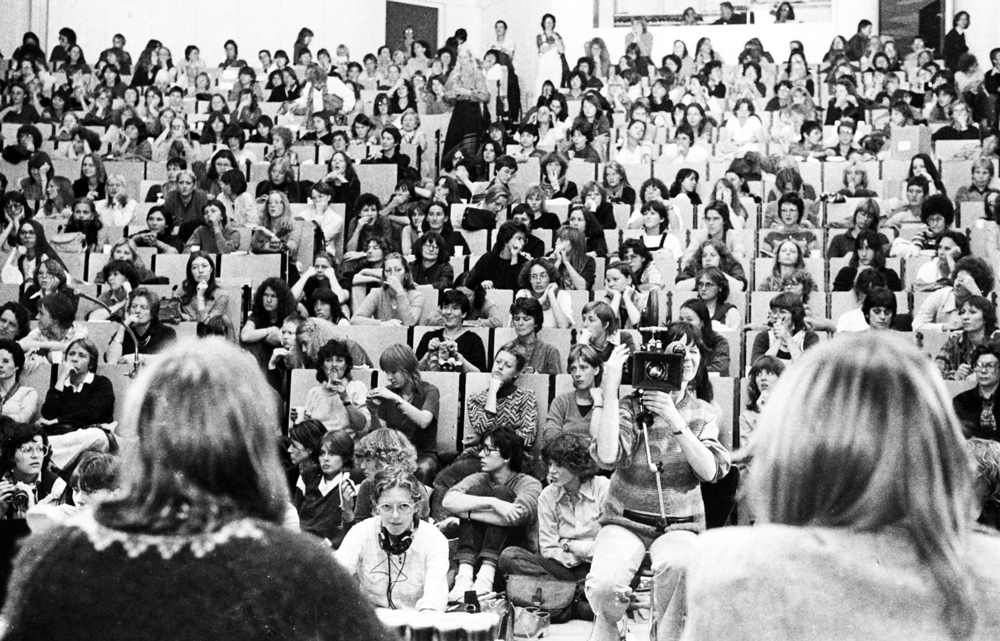 Women students set up women’s seminars first at the psychology department of the Free University (FU Berlin) and later elsewhere as well. In them, they began to illuminate the teaching syllabus from a women-specific perspective. Feminist instructors then initiated the first Women’s Summer University in 1976 in Berlin, an idea borrowed from the USA. Within a few years it had grown to the largest women’s event in the Federal Republic, with more than 10,000 participants.

[ii] Translator’s note: In Germany, church membership has tax implications, and those baptized in one of the officially recognized churches (even outside of Germany) have to document that they have formally left the church in order not to be responsible for paying church tax.