In no. 35 of the journal Kursbuch, published in 1974, five women converse about their experiences with the “sexual revolution,” among other things:

Wera: What happened when you practiced this ‘free sexuality’ and slept with a comrade? He didn’t take you seriously anymore and treated you worse than before. I never understood that.
Laura: My most extreme experience was with a foreign comrade. When I slept with him I thought, this could be an additional element in our relationship now— but then suddenly I was politically worthless, all he wanted to do was sleep with me. He broke off all our previous discussions and our shared work. When I confronted him he just stared at me and said, ‘That’s true, I can’t take you as seriously as before’. This whore complex they have floating around in their heads!1

In those days the left-wing men dressed like political commissars with long leather jackets and coats, as if they had just stepped out of a 1930s Soviet film. They wore army boots and had long hair and often beards, aping the image of the dashing fighter on the posters of Che Guevara that hung in every left-wing student’s room back then. Left-wing women wore their hair shoulder-long, with a miniskirt or corduroy jeans and knee-high boots with heels, all year round. As one woman assured me, these boots were “protection,” a kind of symbolic armor. 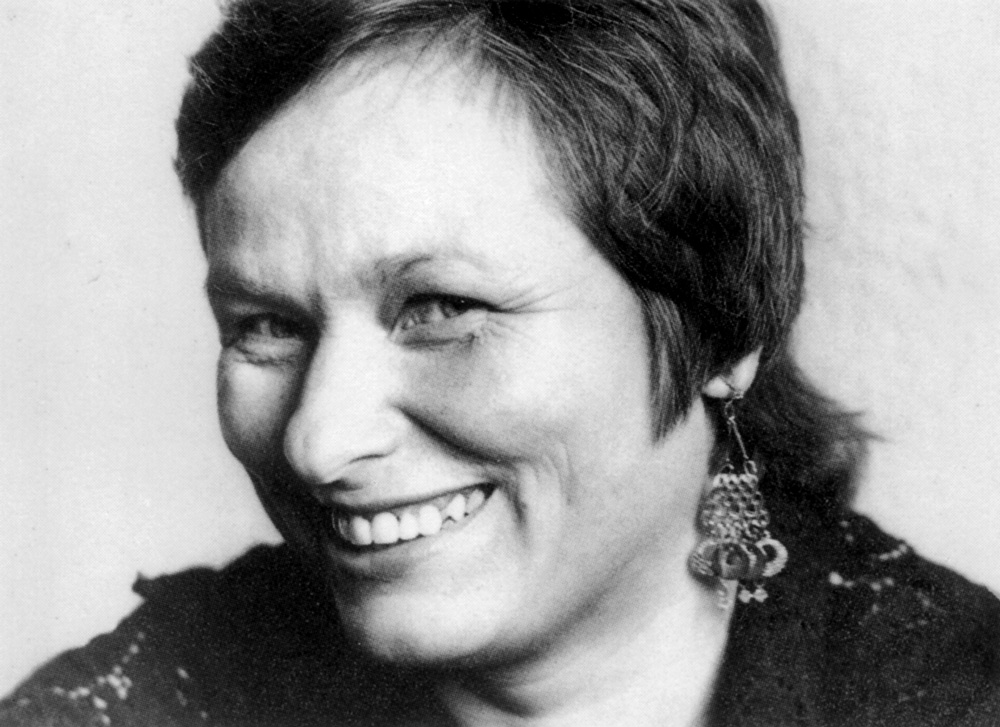 Inga Buhmann (b. 1940), who was active in the Socialist German Students’ League (SDS) in Frankfurt and Berlin, and later in the Spandau Stadtteilgruppe (neighborhood committee), describes her experiences on the Left in her book Ich habe mir eine Geschichte geschrieben (I’ve Written Myself a Story). In 1977 she lists the three roles available to women in left-wing circles in those days:

Every new woman in the group quickly either had to catch an Alpha male as her boyfriend or, presenting herself as liberated, sleep her way through the various beds to find a bit of affection and recognition; or she had to play the strong woman who could do without such things, that is, adjust as best she could to the men and outdo them in ‘masculine performance virtues’.2

Did we experience the same thing at the film academy? My year included four new women at the academy. One of them immediately hooked up with an instructor, the second was already together with one of our fellow students, and the third, Elsa Rassbach, recalled in an interview: “We were seen solely as sex objects. But I wanted to behave just like the men; I thought I should be able to have as many lovers as I wanted. If they thought they were using me, I was using them too.”

What was sex like in those days? The psychiatrist and sexologist Wilhelm Reich wrote The Function of the Orgasm3 in the late 1920s as a contribution to the proletarian “Sexpol” movement. The aim was to liberate the proletariat sexually and to use an objective, scientific approach to break down the taboos around sexuality. Reich claimed that only sexually repressed people could be manipulated and enticed into fascistic behavior. Now, forty years later, the book was rediscovered and reprinted in pirate editions, and attained the status of a “bible” alongside the “blue volumes” of Marx4. While Reich’s book contained many diagrams about the structure and trajectory of an orgasm, according to him there was only one proper kind. Like Sigmund Freud, he postulated penetration as the only proper sexual practice, and he considered all others “immature.” What the Left in the late 1960s celebrated as “sexual liberation” soon culminated in regulation and the pressure to perform. Inga Buhmann writes:

Reimut Reiche extolled the virtues of Reich’s Function of the Orgasm and the true genital libido. Aghast at the sexuality I had engaged in up to then, which was anything but cock-centric, he practiced ‘genital-comradely’ screwing with me. I must confess that I found all that jumping up and down on him quite liberating, almost like horseback riding when I was younger, and I also discovered my own sadistic impulses. However, I never believed in the primacy of the vaginal orgasm, which was quite a courageous thing to admit to such theorists in those days, since Reich was the big discovery invoked everywhere to intimidate women.5

At the time Oswalt Kolle was filming a series of extremely popular sex education films. We analyzed one of them—Helga— at the film academy. Leftists sneered at these productions. In fact, though, Oswalt Kolle’s message was more liberating than Wilhelm Reich’s. For him, no sexual position was right or wrong, everything was allowed as long as the woman enjoyed it. Kolle encouraged men to try out different sexual practices to bring the woman to a climax, and drew their attention to the various erogenous zones on women’s bodies. That was a revolutionary achievement in those days, since the common mode of sexual intercourse back then was of the “Wham bam thank you ma’am” variety.


The myth of the vaginal orgasm

The polemical pamphlet Myth of the Vaginal Orgasm6, which reached us from the United States and circulated in mimeographed or pirated form, also contrasted sharply with The Function of the Orgasm. In the context of my 1997 interviews with historical witnesses, I asked some of them whether they remembered this essay thirty years on. “We all read it, it was something new!” recalled Elsa Rassbach, and Roswitha Burgard stressed, “It was revolutionary. Men were superfluous — so liberating!” Ulla Naumann told the following story: “I brought out a pirate edition and distributed it like mad. Then I put copies in the box in Karin Röhrbein’s bookshop to give out for free. It was a kind of sport in those days: If we liked something we made copies and disseminated them.”
I found Ulla’s pirate edition in that very bookshop in 1969 and it took my breath away! The author, Anne Koedt, asserted that the orgasm did not take place in the vagina, since there were too few nerve-endings there to feel much of anything. Instead, the nerve-endings were concentrated mainly in the inner labia and the clitoris, so that only the stimulation of these areas could bring about an orgasm. Accordingly, the “primacy of the vaginal orgasm” in Freud and Reich was directed against women’s needs and contradictory to biological facts.
This was liberating for me as well, since I had believed that as a lesbian having sex with women, I was missing out on the main thing. I asked a heterosexual friend and she admitted that she had to bring herself to orgasm with her own hand when she slept with her boyfriend. So that was how it was! Well, perhaps not exactly. As Elsa Rassbach explained in 1997, “This theory is simply untrue, at least for me, but the idea that we could make demands, that we women had a right to satisfaction, was quite novel.”

But back to the 1960s… The left-wing magazine Twen7 still operated with photos of naked women. Student publications also contained entire pages of pornography: The very open use of pornography probably had more to do with the pleasure of breaking taboos than a need for “jerk-off material.” The group US Campaign to End the War worked with and sought to politicize GIs stationed in Berlin. Elsa Rassbach, a member of the campaign, told me that her group wanted to show porn in order to attract American soldiers.
An African-American film student, Skip Norman, made a film8 consisting mainly of a single shot of him having sex with a white woman. I can still remember that the leftists at the film academy thought this was a highly successful means of lending visual form to the problem of race, or an act of liberation from it. I didn’t understand that back then, and I still don’t understand it now.
In 1968, as a commentary on the conflicts at the film academy, students produced a flyer that showed one person penetrating another from behind. The figures had photos of two politicians where their faces should have been. One of them was then-Interior Minister Ernst Benda. The motif of this position has been used as a political metaphor countless times since. What was going through people’s heads to make a certain sexual position represent the greatest humiliation? Was it homophobia? Or do men associate penetration with fantasies of violence and dominance like those expressed by the idea of “nailing” somebody.

I noticed that some male left-wing activists referred to their sex partner as meine Frau, (in German this means both my wife and my woman), so that at first I assumed they were married. In fact, this allowed them to avoid the words girlfriend, sweetheart or partner, because this would have suggested an emotional connection or even equality.
We usually expect patronizing behavior towards women from politically reactionary men. But when I consider all of my friendships and working relationships with men at the film academy, the following pattern emerges: The support I got came from “apolitical” men. One of them found me a room without my asking, another organized my move, and a third gave me a job on his feature film crew, all without expecting anything in return. “Leftist” men, in contrast, took notice of me only if they wanted to get me into bed, lecture me or criticize me. To give one example, I chose the theme music from Once Upon a Time in the West to accompany the camera pan across the seemingly endless glass façades of the Märkisches Viertel housing development9, which wonderfully heightened the ominous effect of the image. Thomas Mitscherlich, my comrade from the Wochenschau group, heard this music, stormed into the cutting room and ranted that such a manipulative gimmick was politically unacceptable. I did what he asked, but it was quite infuriating, especially since he had nothing to do with the project. Other women locked themselves into the cutting rooms to avoid such lectures, Helene Schwarz told me later. It didn’t just affect me and also not just my fellow students, but was an omnipresent phenomenon, even in Frankfurt am Main, as Inga Buhmann noted:

The sociological elite met at [Jürgen] Habermas’s, and I would have had nothing against them if they hadn’t paraded their newly acquired lingo at every appropriate and inappropriate moment, at parties, in bars, during sex, in the SDS10, and hadn’t used it mainly to intimidate other people. My main criticism is that they wielded their knowledge as an arrogant instrument of power above all against women.11

The anger expressed in a leaflet by the Frankfurt Weiberrat (Women’s Council) that was distributed at the SDS Congress in November 1968 in Hannover becomes understandable when viewed against this backdrop.

We don’t open our traps!
And if we do, nothing comes out!
If we leave them open, somebody stuffs them: with petty bourgeois dicks, socialist compulsory screwing, socialist children, love, socialist thrownness, bombast …, socialist emancipation drivel — CLAPTRAP!
If we can’t hold back anymore what follows is socialist backslapping,
…
If we spew it all out we’re penis envious, frustrated, hysterical, repressed, asexual, lesbian, frigid, dissatisfied, irrational…
Penis envious, penis envious, penis envious
Women are different!
FREE THE SOCIALIST MAVERICKS FROM THEIR BOURGEOIS DICKS!12

A covert and sometimes open battle of the sexes was thus already in full swing, and was simply swept under the rug again by submitting to party discipline.13