On the occasion of the 1974 murder trial of Marion Ihns and Judy Andersen in Itzehoe, lesbian groups and women’s centers throughout Germany began to work together. In November 1972 the couple had been arrested and charged with paying a man to kill Marion Ihns’s abusive husband. After the trial began in the summer of 1974, several women demonstrated inside the courtroom and outside the courthouse to protest the scandalous trial and press reports.[i] Inspired and infuriated by the defamatory press accounts, we in the women’s group of Homosexual Action West Berlin (HAW) had already laid the groundwork in February 1973 with a leafleting action in Berlin, with the support of the Berlin women’s center. In a series of articles published on 17 consecutive days beginning in 1973, the BILD newspaper in particular had gleefully rolled out a number of violent crimes involving lesbian women.

The front and back of the flyer “The Crimes Against Lesbian Women” that I wrote together with Waltraut Siepert. We printed 10,000 copies, which women from the HAW and the women’s center distributed in Berlin in 1973.

Our flyer of February 1973 showed the BILD newspaper’s banner headline: “The Crimes of Lesbian Women – A BILD Series,” which had been altered by hand to read “The Crimes Against Lesbian Women.” The flyer began with the following BILD headlines:

January 25, 1973           When two women discover that they love each other, they are frequently capable of the most monstrous deeds.

On the rights of the husband:

BILD for January 17, 1973: … and suddenly his heavy drinking bouts also become understandable. He had to get drunk in order to take by force what belonged to him “by right.”

Only men could arrive at the simpleminded idea that women who don’t want to be dollies anymore have to look like guys! …

Over several weeks, the BILD newspaper published a series of articles under the title “The Crimes of Lesbian Women.” They were intended to impress upon readers, especially female readers, that women who reject the role of obedient wife and mother demanded of them by society can only be criminal anyway. A woman who doesn’t need a man to be happy cannot possibly be considered “normal” because that would challenge millennia of the traditional supposed superiority and indispensability of the male sex.

WOMEN, MAKE NO MISTAKE ABOUT IT: These articles were written by a man. Once again, a man has the effrontery to judge issues that affect us women, although he has no clue what he is talking about. Because he is not a lesbian…

But we are! We know the score. We know that we are neither abnormal nor sick nor criminal. We are simply women who don’t enjoy sleeping with men.

Publications like BILD, JASMIN, BUNTE, KONKRET [and] PRALINE etc had the gall to go on about “lesbians,” in a lascivious or patronizing but always distorting manner—thus far, we were all good enough to make money off of with such reports. These articles fulfill but one purpose: They frighten many women away from admitting to their own actual sexual desires or rather from accepting themselves as homosexual women. Thus it is not just a matter for lesbians, but for all women, because it shows once again how oppressed we still are in social life, despite legal equality with men.

While the man, as “head of the family,” is allowed to exercise unlimited power at home after a day of submitting to orders from his “boss,” women are constantly forced to keep their heads down. The restriction of our personal freedom is so great that we are even told whom we are allowed to love and whom not.

We women protest against the denunciation of female homosexuality in the form of smarmy articles that distort the facts. Only those affected can provide objective information, not some “scholar” or hack writing for the tabloids. 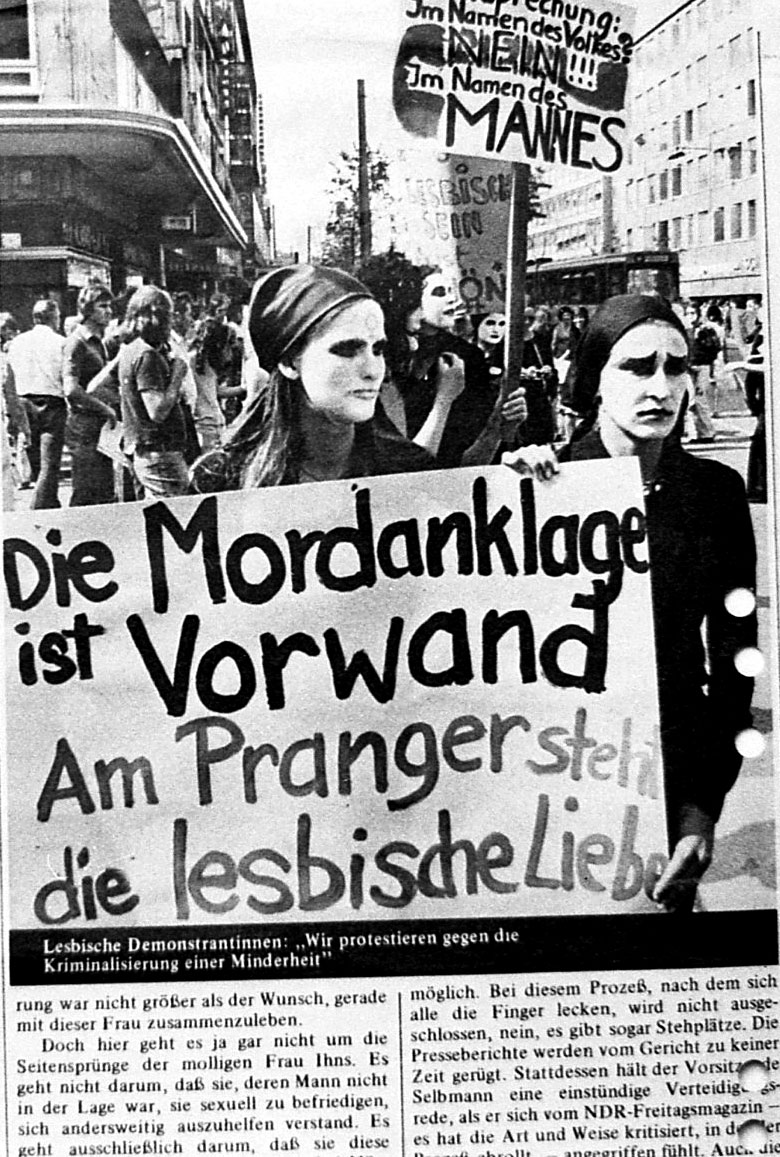 Women in Frankfurt am Main demonstrate against the trial in Itzehoe in 1974. The poster reads: “The murder charges are a pretext. What’s on trial is lesbian love”
Photo: Der Stern

With this initial action, we also attracted the interest of the women’s centers and lesbian groups that were being founded in West Germany. During the trial the following year they then composed their own flyers, which expressed how the events affected lesbians and heterosexual women alike:

It is of course easy for this court, which sits in judgment over two women here in Itzehoe, to engage in a show trial against lesbians and to cite base motives, since that means nobody has to consider the situation women face in this male-dominated society.

This court has never spared a thought for the SOCIETAL AND SOCIAL circumstances in which these women—and women in general— find themselves. It has naturally never taken into account whether this society, by forcing people into heterosexuality, with virtually no hope of escape, does not perhaps veritably PROVOKE COUNTERVIOLENCE:

Who accepts her own, female, sexuality and refuses to resort to men for recognition as a woman, and is compelled to play the failed man for the press and justice system. She also behaves in keeping with this role—what choice does she have? The life circumstances of Marion Ihns force her into the role of protector. By the way, in this situation any man would have been turned into a “tragic hero.” Not so Judy, she is not a man and it is held against her that she consistently played this role, which society assigned to her. She resists by helping to plan the death of Herr Ihns, since Marion cannot escape from her husband.

Her surroundings have put Marion Ihns into a mental and social state that renders escape impossible. So completely has she internalized the male world, that she was unable to develop an identity of her own.

She was made into a “woman” quite early on. This meant, among other things:

What does a woman do when she realizes that she can no longer bear her life as it is?

She tries to get a divorce.

The response is her husband’s attempt to poison her.

BEFORE LOSING HIS PROPERTY, HER HUSBAND PREFERS TO KILL HER.

For both women, life thus becomes an unbearable situation of PERPETUAL SELF-DEFENSE.

If the judicial apparatus and the press are unwilling to face these facts they do not have the right to judge or write about these women.

For us women, this trial, which has become a farce because it completely ignores the entire context of these women’s lives, can have but one possible conclusion: THE WOMEN MUST BE ACQUITTED![iv]

Women protest in the streets… and in the courtroom

During the trial, women from the HAW women’s group and the Berlin women’s center as well as Hamburg and other cities came together on September 16, 1974 to demonstrate outside the courthouse in Itzehoe and inside the courtroom itself: They rose from the spectator seating and opened their jackets, under which each of them wore a letter belonging to a banner brought into the courtroom. The slogan read: “Against the prurient press – for lesbian love.” They also chanted additional slogans. The members of the court were bewildered; the two accused women were hustled out of the courtroom and the judges and lawyers fled, robes fluttering behind them. The action caused a furore.

This protest took tremendous courage: The participants “came out” on a national level (as the photo from the BILD newspaper demonstrates), risked a beating by the police and also faced punishment for contempt of court. One participant explains:

Twenty women had to be able to rely on each other; for the most part we had never met before. Before, after and during the action we showed great cohesion, without which we would never have gained and maintained the necessary strength.

Because we were scared. All of us. Scared of a totally new situation, scared of the possible consequences: Cops beating us, arrest, jail (and the attendant negative effects for the future, for example as civil servants).[v] BILD title page of September 17, 1974 on the protests in the courtroom in Itzehoe. The headlines read: “Life imprisonment… said the judge to the lesbian women at 3:46 pm” and “Judges flee lesbian women.”

More hounding by the press and protests at the Press Council

Although we had already protested the BILD newspaper series the year before the trial, we were forced to recognize that other Springer company publications were continuing the campaign against lesbians with headlines like “Lesbian Entanglement” (Die Welt) or “Abysses of Sexual Confusion” (Hamburger Abendblatt). An article in the Münchner Abendblatt newspaper also noted: “They made love constantly to soft music….”

But now, in 1974, the Berlin women’s center already had the Media Group, which brought together committed Berlin journalists. This group collected the signatures of 146 female journalists and 41 male colleagues, and on September 5, 1974 successfully petitioned the German Press Council to censure the “Springer company publications … for their sensationalist coverage of this trial.”

The protest by the lesbian groups and women’s centers continued across the country. The Kassel women’s group, for instance, complained in a flyer:

The court fosters such coverage by

We believe that this is intended to turn all homosexual women into objects of horror. Let’s not forget that there have always been attempts to incite the population to hatred of minorities in order to draw attention away from misdeeds… The principles of marriage and the family have become questionable for many reasons, and homosexual women also appear to challenge this order. Is that why they evoke uncertainty and rejection? 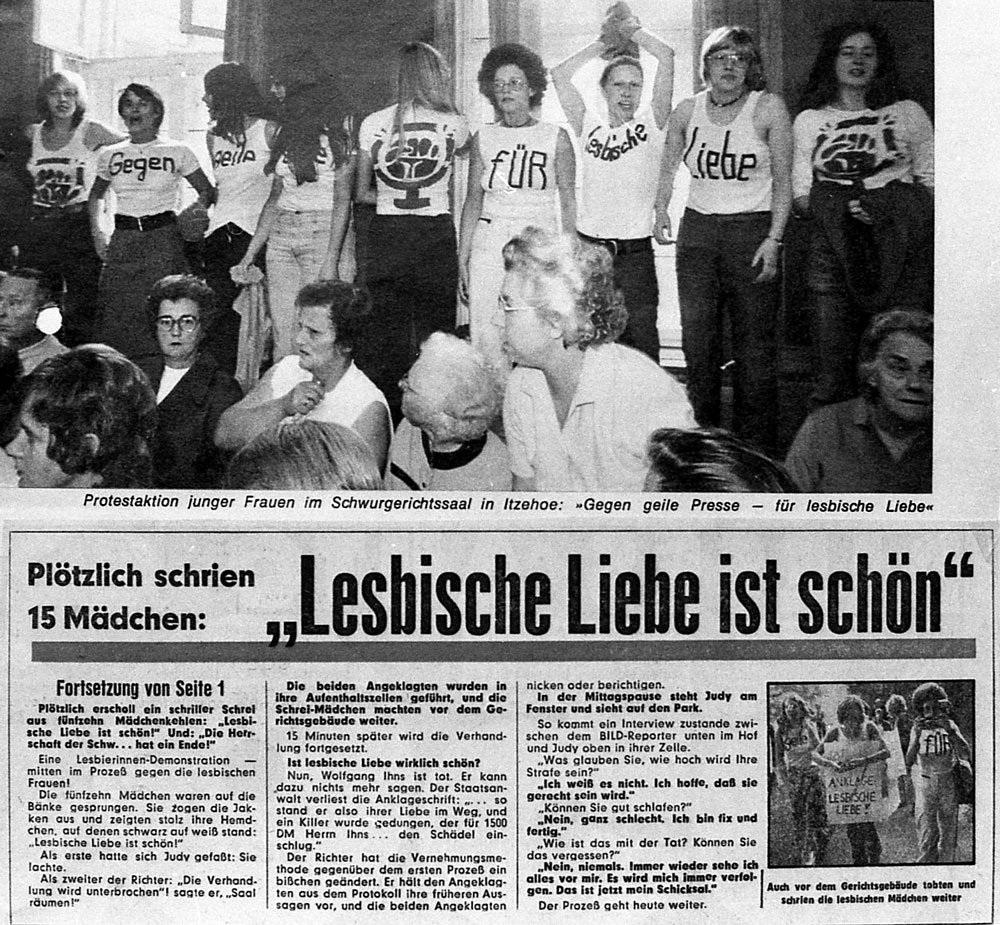 BILD writes on the topic: “Marion Ihns… had her first sexual experience at the age of nine. She was seduced by a 62-year-old male neighbor.”

In a two-page flyer, the Frankfurt women’s center took a position on the court opinion of October 1, 1974:

The judge says: The disgust and feelings of hatred that Frau Ihns had for her husband resulted not from their broken marriage, but from the relationship between the two women.

This means: If you feel that you have been brutally treated and raped by men, there is something wrong with you. Woe unto those who fall into the hands of a seductive lesbian, because then your natural feelings will be transformed into perverse man-hating.… If your boyfriend rapes you in your home, no court will help you. You need to speak about this violence if you are going to sit in judgment over women’s violence against their husbands.

Our campaign against the defamation of the lesbian couple Ihns and Andersen had no influence over the court. The verdict was not acquittal, but life imprisonment for both women. However, our actions were first steps towards addressing the issues that would concern the women’s movement in the decades that followed:

had been raped as children, Judy at the age of four and Marion at nine. Both were beaten as children. As a child, Judy had been forced to watch as her mother brought home men who beat and raped her. Later, Judy tried to protect her mother against them. To prove his insulted virility, Ihns raped his wife three times a day.

After the action, we received letters in which women told us that our efforts in Itzehoe had encouraged them to start their own groups. They had realized that women simply had to stop putting up with certain things. But you can only address discrimination collectively.[vi]

[ii] “die Lesbischen.” Translator’s note: In the text there are three terms that I have translated here for lack of non-slang alternatives as lesbian(s): “die Lesbischen” (a pejorative term used by the tabloid press, a noun made out of the adjective lesbisch), Lesbierin/nen, a now old-fashioned term perhaps akin to the English Sapphist(s), and Lesbe/n, the word that came to replace it, which was also generally preferred by women themselves.

[iv] The flyer was signed by the women’s group of the HAW Berlin, the HAH Hamburg, and women’s groups from Hannover, Hamburg, Munich, Cologne and Münster as well as the women’s centers in Berlin, Heidelberg and Frankfurt am Main. Headline of the Quick Revue: “I warn all women against lesbian love.”