Everything happened in private/ They’re more sophisticated nowadays, but the romance is gone/The 1950s/ a gift to all the women in the world!

Lyrics of We are the homosexual women

In the chapter Little Band of Perverts I describe the beginnings and structure of a visible lesbian subculture in Berlin in the early 1970s. But what was lesbian life like before lesbians began organizing again for the first time since the Nazi period? Two interviews with women I met at that time offer some insights. They had already lived as lesbians for decades, more or less secretly, before co-founding the first lesbian group within the Homosexual Action West Berlin (HAW) and later the Berlin women’s center. 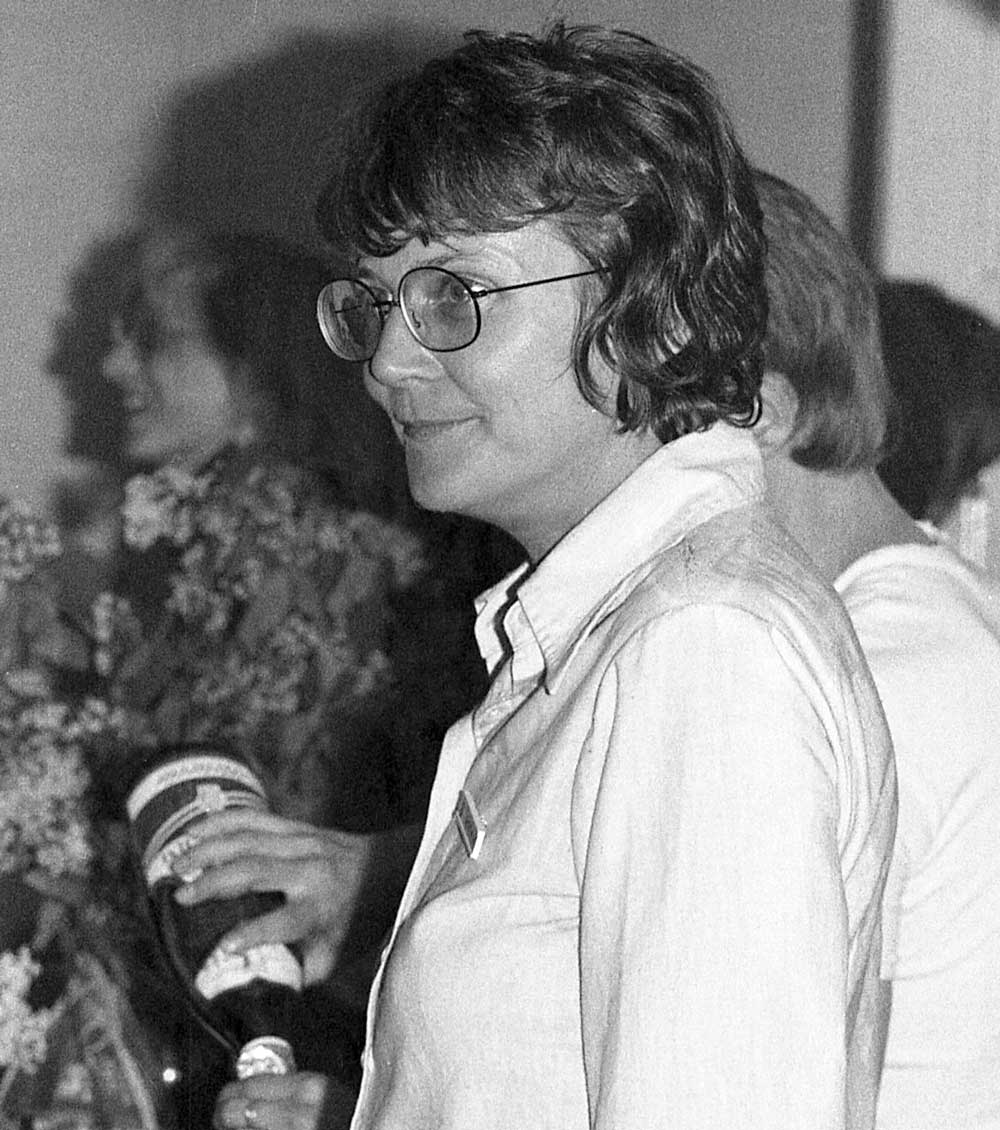 Everything happened in private

Gisela Necker was born in 1932 and had to start earning a living soon after finishing secondary school in 1950, since she was an orphan. She trained as a teacher, which went very quickly in the GDR in those days, and at 18 already found herself in front of a classroom. Then she contracted tuberculosis and was sent to a sanatorium. In 1959 she moved to the West.

By the age of 13 she realized that she had no interest in men, but found women “very exciting.” She had intense romances with other schoolgirls; nobody noticed a thing “except for those who were involved, and they were in love too and found it wonderful.” This is how she described her love life:

I had my first long relationship at 19 in the TB sanatorium. My first girlfriend wasn’t a lesbian, she just fell in love because I was so charming, I wormed my way into her affections. We lived in a double room, it was my first sexual relationship and it was really lovely.

The words lesbian and homosexual were only vaguely familiar to us. Nobody talked about it. I personally saw it as more of a schoolgirl crush. I then learned the facts of life from a Berlin lesbian, who said, ‘Gisela, that’s what they call homosexual.’ I was 20 at the time and got quite a shock. It was a very nasty word in 1952. On the other hand it was also a liberating feeling. It had always seemed a bit abnormal to me that I didn’t care for men. If you can put a name to it, it is less unnerving somehow. I didn’t talk about this with my girlfriend.

Nowadays the romance is gone

In our conversation Gisela Necker described her discovery of lesbian love and also spoke about differences to the way lesbian sexuality is treated nowadays (1996):

I had thought up all the little acts of tenderness myself, and left it as a love that arose out of ourselves. For weeks we just kissed and caressed, before we had sex. There was something thrilling about the secrecy and concealment. Nowadays things usually go faster and get right to the point. Something has been lost in the process. There is less discrimination now, women know everything, they’re sophisticated, but where is the romance? Many things are so technical these days, like in Sapphistry,[i] a book that describes all of the techniques in detail, you just have to leaf through it if you run out of ideas.

I didn’t question my role as a woman in the 1950s. I accepted the world as it was—there was no way to change it. Women get married, start a family and warm their husbands’ slippers. At 18 it was already clear to me that I would happily have shortened my life span by 30 years in exchange for being born a man. I was more the butch type, and always took the active role. However, I also told myself: I can have my pick of all the beautiful women I want. I had lots of relationships, although everything happened in private, colleagues or women I met on vacation. They were never lesbians.

This was how Gisela Necker experienced the lesbian bars in West Berlin in the 1950s:

I moved to West Berlin in 1959 because there were signs that the border would be closed soon.

In those days there was a club called Bei Kathi off a courtyard on Augsburger Strasse. But you only found out about it through connections. We played party games there and dancing games. Kathi was still organizing these dance parties for older lesbians at the Interconti in the 1980s. Many young lesbians also went along because they found it hilarious: you could go there to watch the old-school lesbians, with their butch-femme roles. And I was caught in the middle.

The Sappho at the corner of Uhland and Pariser Strasse was very different from Bei Kathi, there was a generation between them. The mere name Sappho already tells you who went there. Bei Kathi was still very discreet, with the atmosphere of a club, very plush and low lighting; you went there late at night.

People drank a lot. Some wore severe skirt suits and the ladies wore cocktail dresses. Everybody was greeted with a handshake and we all knew each other by name, it was a sort of group atmosphere such as we encountered again later. Mostly dancing, but not to that loud music, sometimes to an accordion and a rhythm instrument. We did circle dances like they do again now! Later I dismissed it as awfully square, but looking back it doesn’t seem so bad anymore. It was a relaxed way of getting to know a range of women.

But in the 1960s what we used to call sociability fell by the wayside, throughout society. Instead of parties, people gave cocktail receptions where you stood around. In the mid-to-late Sixties this awful distance arose, I would love to know why. In the early 1960s we still had great parties with our coworkers and that wasn’t possible anymore in the 1970s, although they were the same people. The younger ones gave parties, but they weren’t these sociable get-togethers.

The Sappho already existed in the early 1960s. The lesbians stood at the bar, very isolated; either you arrived in pairs or you came alone and tried to chat up a woman somehow. In the 1950s you bowed if you wanted to ask a woman to dance—ridiculous! Later, without that, you had to drink something first, then it was easier. The first two hours were horrible, it was like a communication disorder.

If I wanted to meet women I did it through personal ads in the Telegraf newspaper. That was the only Berlin daily that accepted such ads, which read something like ‘Sporty gal seeking same.’ The word ‘lesbian’ was out of the question.

I was in the audience at the Akademie der Künste[ii] when you and Waltraut Siepert stepped onto the stage and said: The men have started a gay group, we women want to do that too. We’re meeting next week at L’Inconnue.[iii] And I went along and was incredibly happy!

Gisela Necker never came out publicly as a lesbian, but she remained active in the lesbian movement until the end— not in the L74, the group of older, professional lesbians, but working and discussing with the young, radical women of the LAZ. She died in Berlin in 2011.

Waltraut and her clique[iv] picked me up at the Sappho in the winter of 1970–71. Waltraut Siepert—born in 1938 and raised in Thuringia—set off for the West the day she became a legal adult. There she worked as a dispatcher for a film distributor, married her high school boyfriend and had a daughter. But she had already fallen in love with a female teacher at the age of six, although she didn’t know how to interpret the feeling.

Later I attended the World Youth Games as a Young Pioneer. I had terrible blisters from all that walking around in the name of friendship among nations and ended up in a Red Cross tent. A woman who was seeing to us stroked and hugged me and I could feel her breasts—And then I was… then I stayed sick for the rest of the time!

I didn’t know the word ‘lesbian’. Nobody ever talked about things like that. I only knew that I had this incredible longing for women. 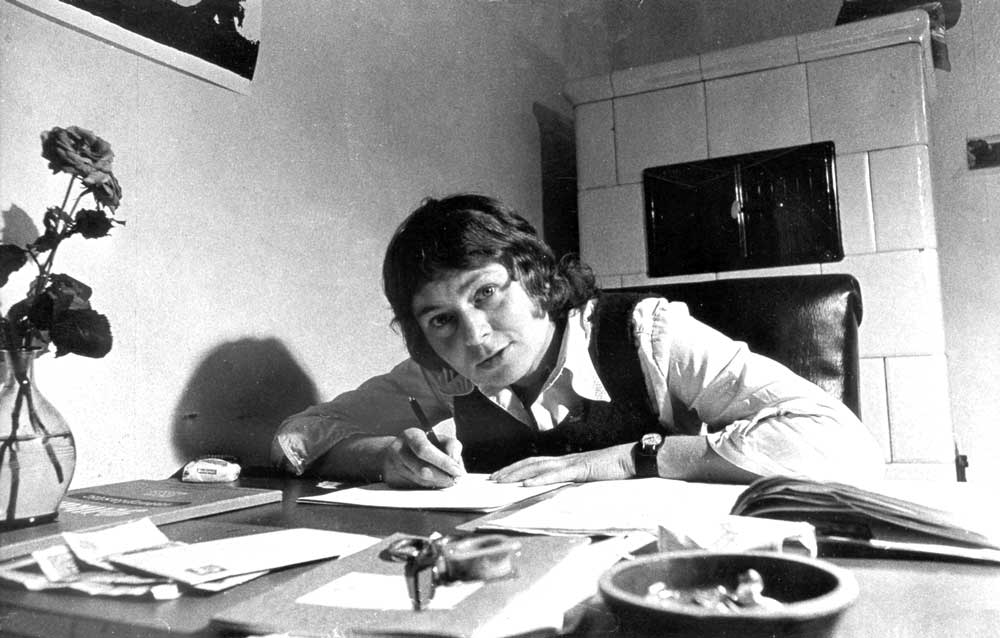 Waltraut Siepert in 1971 at Eisenbahnstrasse 22 in Berlin-Kreuzberg. Photo: Cristina Perincioli

A gift to all the women in the world!

Waltraut began her first relationship with a woman when she was 28. She was a neighbor, also married, whom she met secretly at home with the curtains closed and later at Valentino, a women’s bar in Düsseldorf, which Waltraut described as follows:

Red lights, mirrors, armchairs, with a bar, dim lighting; the atmosphere was like a brothel, sex was the main thing. We had never learned to deal with each other properly. It was very competitive. But I wasn’t alone anymore. That was where I saw two women dancing together for the first time, in public. At home we always had to draw the curtains tight, and there the dance floor was full of women, what a feast! It is great to see other lesbian women, a real support, I knew where I could go, where I could talk about it with somebody. That was unbelievable progress. It gave me enough strength to leave home.

What followed was a very tough period for Waltraut Siepert. She left home with what could fit in a shoe carton and needed two jobs to keep her head above water, but she put her emotional life in order:

As long as I was married I felt no satisfaction, not from being touched, and climaxing was an utterly foreign concept to me. That is why it hit me like a ton of bricks when I was together with a woman. These were experiences and feelings that I had never known before, and they made me see my environment in a completely new way too. I would have liked to give what I felt and how wonderful it was as a gift to all the women in the world!

The song “we are the homosexual women” by the women’s rock band Flying Lesbians reflects the feeling about life described by Waltraut Siepert, which many women discovered for themselves in the 1970s:

You stand there and stare

As if we were completely different from you

Your gaze is a stupid trick

But we don’t care anymore

You get funny with us

But you can’t have us

Not long ago nobody saw us

But now we’re coming into the daylight

Now you can’t overlook us

We’re beautiful and smart too

But that’s not enough for us

We want the power

And we want it right

Man, you stand there smiling so wide

But maybe your wife is on our side

You really never know for sure

You never know for sure

You stand there so damn normal

But your normality is such a pain

[i] Pat Califia, Sapphistry: The Book of Lesbian Sexuality (Tallahassee, 1980).

[ii] She refers to the screening of Rosa von Praunheim’s film “Not the Homosexual is Perverse but the Situation in Which He Lives” at the Akademie der Künste on February 6, 1972, which led to the founding of the lesbian group.

[iii] This was an unpretentious lesbian bar at Goethestrasse 72–74 in Charlottenburg.

[v] Flying Lesbians, LP, Berlin 1975. The lyrics and melody were written by women at the lesbian camp in Sanguinet in 1974.