1974 Across the Berlin Wall

“The beautiful sex” – womens rights in the German Democratic Republic

Since it 25 years of existence, the GDR was always in need of women as workers. After world war II, especially the male population was decimated and most means of production had been destroyed. Until 1961, many people – about one tenth of the population – left the GDR. But a whole economy had to be reconstructed, and a socialist society to be created. In the sixties and seventies, the Federal Republic of Germany needed 2,5 million immigrant workers to keep the capitalist machine running. The socialist countries had to do without; they had to mobilize the women. Same wages for same work are paid in the GDR as early as 1946. Ideologically, work is propagated as the only way to women´s liberation. Thus in 1970, there were 81,5% of the women in an able to work age working. That means, 49% of the work is done by women! But women are still doing the less qualified and the less influential jobs. To change disproportions, the new Constitution of the GDR from 1968 obliges expressively all state´s and social institutions to „promotion of the woman especially towards professional qualification“ (Art. 20,2). In all branches of industry and agriculture, the Union organizes women in special „women´s commissions“; „women´s advancements plans“ have to be elaborated by these commissions each year. Selected women are collected in „spezial women´s classes“ and they do get about 20 hours a week off, paid as their work, for their studies. Much does the „economic lever“: passed examinations are awarded by money-premiums. Thus the number of female students is comparatively high. 47% at Technical Schools (Fachschulen), 36% at regular colleges and universities, 29% at technical colleges. S.7. – 8. Women at home: The “beautiful sex”, how they still like to call women. 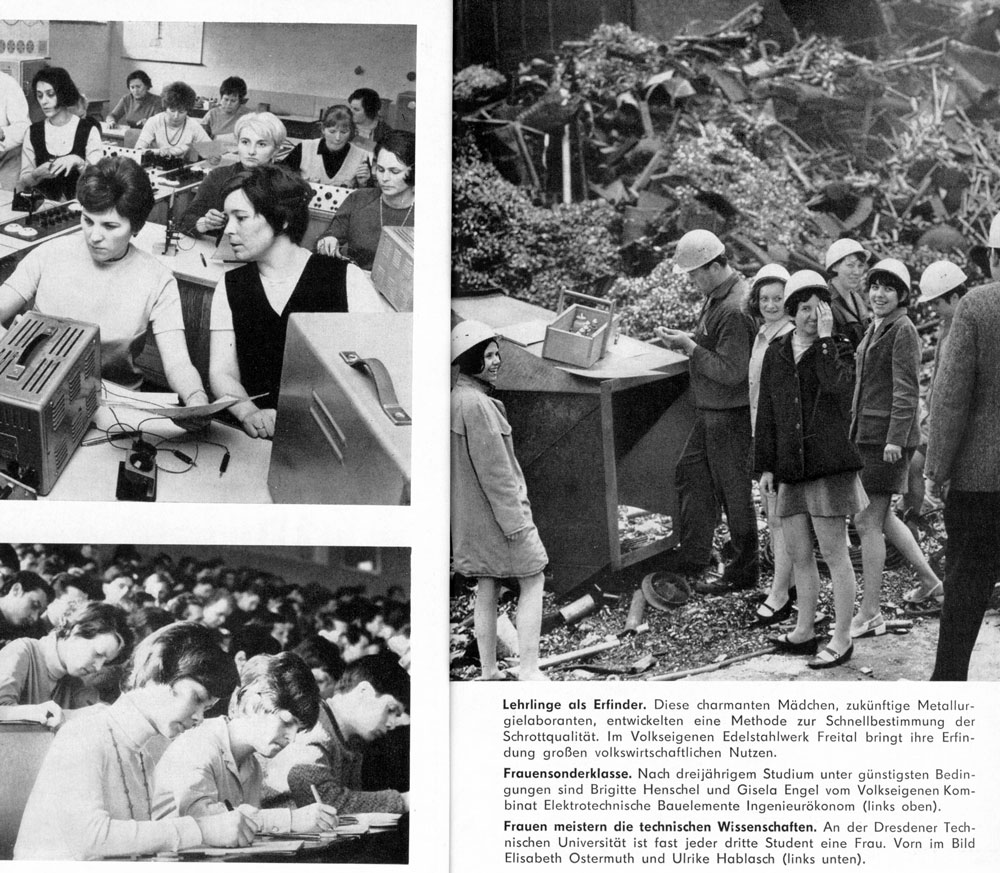 Women at home: “The Fair Sex”

The state needs children for reasons of existence. Western propaganda still tells fairy tales about the abandonment of marriage and family within socialist systems. But the opposite is true: Whenever a socialist party, in the USSR as well as in the GDR, get the power in the state, former ‘anarchical‘ ideas like ‘free love‘, ‘free abortion‘ etc. were rejected and family as a stabilizing and discplining factor was soon recognized. Consequently, the GDR Family Statute Book of 1965 starts ist preamble with the statement: „The family ist he smallest unit of society“.

Much has been done, in practice and ideologically, to keep women marrying and childbearing. A young couple gets a marriage-credit [loan] of many thousand marks, which can be paid back by the birth of children. In case of pregnancy a woman is guaran teed a paid leave of at least 14 weeks. The working woman can bring her baby into baby-nurseries; for older children there are Kindergaerten, whose capacities cover already 70% of the real needs. There has never been discrimination of illigitimate children; but abortion, though uninterruptedly practised, has not become legal before 1972.

Nevertheless, all these facilities especially fort he working women could not prevent wives from breaking down under the double claim to become a qualified worker in the productive sphere and to give birth to children as ‚natural and necessary accomplishment’ of her marriage and her personality. Beyond it, partnership in the marriage has not been realized: representative statistics (1966) tell us that wives are still doing four fifth of the house-work which means [p.8] about 38 hours additional work a week!

For this and other reasons, a striking feature of the relation between the sexes in the GDR ist the extremely high rate of divorces – the highest in Europe after Hungary. 62% of divorces are requested by the wives. A progressive law makes divorces possible without a judgement on the guilt of one partner.

The Democratic Women’s Federation of Germany (DFD) was founded in 1947 at the 9th of March. It came out of the antifascist women´s commitees, an organisation starting it´s work right after world war II: They organized help for mothers, children and homeless people but before all they worked to get fascism out of the heads of German women and to make them understand the necessities of the new socialist establishment which had come with the help of the Soviet occupation.

It was not an organisation that came out of a women´s movement – there had been none for a long time – this organisation had to bee decreed: All four parties and the Union should delegate women to organise such a thing. The DFD was constituted two years later in the same way and with the same tasks, but with more emphasis on women´s problems: the DFD had to watch that laws were changed to guarantee equal rights for women in wages and education and especially support for working mothers. So the DFD has delegates in many different committees and has 7% of the seats in Parliament reserved for their deputies.

Some facts about the work of the DFD today:
The DFD has 1,3 million members, of which only ¼ is under 35 years old. It is an organisation specially meant for housewives, but nevertheless 2/3 of the members are working.
Four times a year every section should hold a public meeting in it´s area. The DFD organizes so called Women-academics, where lectures are hold on education, gardening, Marxism-Leninism, medical questions. Information centers should [S. 10] help young housewives to find the most rational way to get housework done, regarding that still 4/5 of the housework is done by the wive only, the DFD concentrates very much in releaving working women more and more from their duties e.g. by demanding better food in factory-canteens and schools so that cooking for the family might no more be necessary in the evening, and amelioration of the washing-service. The DFD also tries to reduce housework by attacking old-fashioned neatness-standards in the heads of the women.

All this is not for the sake of the women themselves but to make possible what had been decided before on a higher different and male level of politics. The DFD is the grease in the machinery: Here women have – like before in any bourgeois society – the function of helping, rescueing, mending the bits and ends the male machinery has run over and left behind.

After the rough sketches on women at work and at home and the women´s organisazion DFD we have to look closer at cultural phenomena to find out about ideology on women; whether there is a notion of womanliness, of „psychology of the sexes“ and a possibly new socialist moral.

A propagada brochure expresses already in it´s title the double claims on women: „The Beautiful Sex and Equal Rights in der GDR“ (1971). It´s reader is assured of the beneficial effect of female charms:

„The charms conquered the factories and paired with prudence it has even become an enlivening factor in production. In some hearty men´s brigades it had a cultivating effect. And the work makes a woman not only an equal, inspired partner of the man, but generally she stays longer young and elastic“! (p.60)

The double claim on women means here to satisfy male norms in production and qualification and to preserve at the same time „female qualities“ which also might be male norms. And the preservation of charm and beauty is limited to women: no word on the necessity of changing men´s image.
And the women do their best, they are „charming, witty, adroit, fit“, and have no aggressions against this multiple overburden but accept it as necessary difficulties of a „transition stage“ of society. That „male attitudes change sowly“ is a common excuse for women to take comfort.

Here are the extracts of some interviews we had with different women:

Q. have you got besides the DFD any autonomous women´s groups?
A. No! We don´t need any. We don´t have any special women´s problems anymore like they have in the West.

Q. Have you ever asked yourself why abortion is only free since 72 (of course only fort he first three months). Regarding that the German Communist Party struggled fot this right already in the twenties, and in the Soviet Union it became free right after the revolution – of course it was restricted with the advent of Stalinism – . So why did a socialist country wait so long to give women a right the Communist Party had promised women until they got the power?
A.No.1 Any state wants to grow. They could only change this law, when the state could provide enough stimulance for women to get children.
A.No.2. You`re kidding! We really had other problems to discuss free abortion at the time. This is a question of economy. Even a socialist state can give women this freedom only when she is firmly anchored in state and production.
A.No.3. Anyway, I got my abortion – I had to go to Poland. It costs about the wage of a secretary. And since many years we all can have the pill, it is cheap or even free.

Q. When abortion was not free and women had to be very tricky to get one – wasn´t there any protest, any plead, any movement to change this situation?

A. No. No woman would dare that. Any coming together in groups ouitside the official organisation is unthinkable.

In a very special degree, this comes true for the existing minority group of homosexuals. Homosexuality, unlike the begetting kind of sexuality, is covered by silence. Our friends told us that homosexuals are mocked at, but tolerated; that they certainly never will dare to come out from privacy and that any homosexual organisation cannot be imagined; that homosexuals are very often overconforming; that they can have a psychotherapy on demand which will operate with small electric shocks.

Siegfried Schnabl, a well-known GDR-sexologist, reports with satisfaction a general reduction of homosexuality in the socialist part of Germany: only 2% male and 1% female homosexuals in 1972! This attitude corresponds to the theory that in socialist societies all „perversities“ will disappear by and by, because this kind of intact society makes satisfying heterosexual relations possible.