In an initial overview for the present project, I described my coming-out as a lesbian in the summer of 1970 as quite harmless, at least at the film academy, where there were many gay men and a liberal climate prevailed. But having set out to decipher my notes from the time, I am confronted with an enormous rage that I must have repressed completely— a radical anger that explains some of what happened later.

On the margins of society

I had known I was a lesbian since the age of fifteen, when I read Carl Gustav Jung’s remarks on the disorder of homosexuality. So my tender feelings for some of my female friends—of my age and older—were “sick.” And, because they were also associated with sexual desires, they were also sinful, impure etc. From that time on I tried to rid myself of these forbidden feelings and to that end I also confessed my “problem” to my mother. She offered to send me to a psychiatrist, which I angrily refused—I wasn’t crazy, after all. After that the subject was closed.
She did, however, take me to see a film that left me in a state of shock lasting many days: The Children’s Hour1

. In the film, a small private school is forced to close because of a rumor that the two women friends who run it are lesbians. One of them, played by Shirley MacLaine, indeed has no man at her side, and in the course of fighting the rumor it occurs to her and the audience that there may be some truth to it in her case. As a result she takes her own life. The conclusion was clear: I was not just sick but also insane and all I had to look forward to in life was suicide.

Around the same time some mothers seem to have discussed me. When I returned to school after the vacation, my best friend and seatmate Billy wouldn’t talk to me. I was baffled? Why? Why? In the toilets one of my classmates took pity on me and told me that Billy’s mother had forbidden her daughter to have anything to do with me because of the unspeakable. Billy obeyed her, for an entire year.

Verena Stefan, a friend and classmate from this time, describes in Häutungen 2 how she felt about me (called Ines here) as follows:

The yearning for the man of my dreams had gnawed its way into my very marrow. I was spending a lot of time with Ines in those days; she was different. She wasn’t going with anybody; she was going with herself. We touched upon that topic once .… Ines spoke hesitantly. She was afraid she wasn’t normal, she didn’t feel attracted to men. Something was wrong with her, she said. It bothered her. No one used the word homosexuality, but a sense of uneasiness lingered. … These pioneer days with Ines were short-lived. Something was lacking when I was with her, despite shared thoughts and experiences. I felt unfulfilled. I fended off her peculiar admiration and encroachment. It was embarrassing. After all, Ines was a woman, how could she give my life any meaning, how could she conquer me?

This kind of rejection was repeated several more times. From today’s perspective, it is worth mentioning that my approaches never went beyond the verbal. I behaved no better myself, however, and internalized the role of oppressor, playing morals police towards a younger girl I caught kissing another girl at Girl Scout camp. 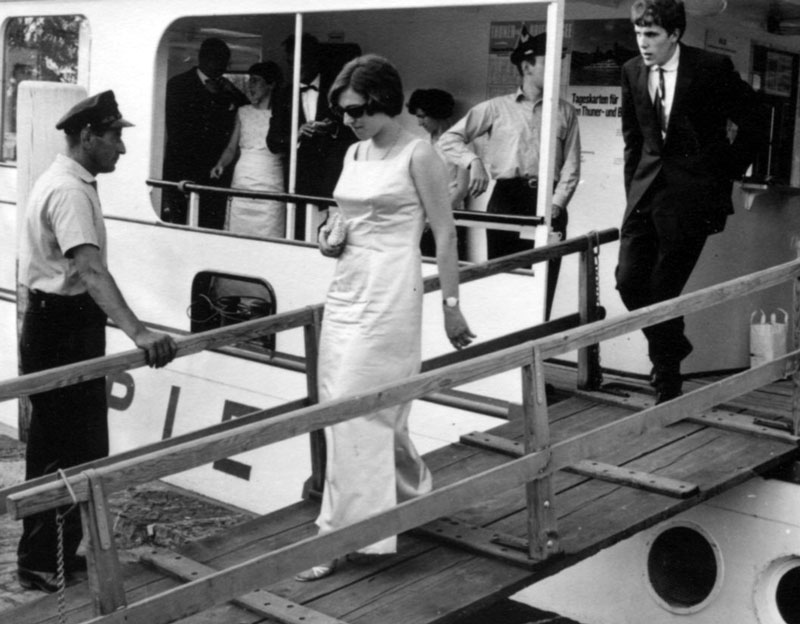 When she got married at the age of seventeen I was one of her bridesmaids, dressed in a long gown slit up the side, as you can see in the picture. It was not until a few years later that I learned this was a gay wedding. A homosexual man had asked her to marry him, since his predilection for boys had already brought him into conflict with the law. She knew she was a lesbian and she liked him. For her, he was the first adult she could confide in. She hadn’t been able to do so with me at the time.

Finally, however, an older, married lesbian found me, fell in love and introduced me to the delights of lesbian love. The romance continued for several years, but as a long-distance relationship, a torture of yearning that increasingly wore me down. She repeatedly spoke about getting a divorce but was afraid to become dependent on somebody else, especially a younger woman, a student. She did eventually divorce her husband, but only decades later.

In the meantime I had learned to enjoy a different pleasure: working together with a woman. No cajoling, no projecting emotional needs onto a long-distance relationship that remained uncommitted on top of it all. Instead, a cheerful smile greeted me every morning, the pleasure of shared adventures, indulgence towards one another’s peculiarities, solace when lovesick, learning and producing and conquering new territory together.
Gisela Tuchtenhagen and I grew closer and closer, and also spent our evenings together, and then our nights. The dilemma—I was a lesbian but Gisela was not. She would sleep with me sometimes when the mood took her, but for her what we had remained a friendship and a working relationship, which she wanted to maintain. “I couldn’t imagine a better one,” she said. But she didn’t share my sexual desires.

I couldn’t handle this emotional seesaw, and tried to reject Gisela and kill our relationship. I experienced her unaltered desire for a friendship as almost tantamount to abuse, since she refused my innermost needs. And she needed no explanation for her rejection— what I wanted was simply not “normal.” I felt like I was merely tolerated in the world of normal people, humiliated as a pathetic little creature.
I didn’t understand this at the time, though, and it expressed itself as a vague fury, “which feels a mile high” as I noted at the time: “aggressions and withdrawal: masochism, anger at myself = punishment? For something that I want and should not, must not have. Lashes of the whip.”

My rage was transformed into a radicalism that no longer fit with the work in the Wochenschau group. At a group meeting I formulated my new radicalism, referring to it at the same time as an expression of my psychological problems, as a self-destructive impulse. I saw myself running amok. Consequently, I announced to the group “I will now part ways with all the lovely people [in the Wochenschau group]. At this point I see that Gisela was strongly affected, which I didn’t expect and which confused me at that moment.” The group groaned “that I was doing something irrational, and they wanted to stop me. They had to worry about me all the time.” Our instructor Klaus Wildenhahn tried to talk me down with an offer of work, namely, to shoot a 45-minute documentary in tandem with a production of his for North German Broadcasting.
Now, finally, while searching for a subject for the documentary, my baffling rages dwindled and I asked myself in my notes, “Why so furious? Because of my sexuality, which I have to fight for?” A straightforward question, and at long last an answer as well.

Two notebooks later I was already at work. I asked myself “what resistance to the topic of homosexuality can be expected on television, which organizations exist and who is doing research? How could one get to the bottom of the reasons for rejection and contempt?” I announced to Klaus Wildenhahn that I wanted to make a documentary about homosexuality, “because it affects me personally.” From that point on he supported me as best he could.

This did not put an end to my mental convulsions, however. After two full pages of scribbled book titles and addresses, my notes go on to describe three dreams:

First dream: My face is peeling off, everywhere tufts of hair sprout, which I can easily remove, but the skin comes off with them and the hair keeps growing. My nose is already completely gone.
The whole next day I was terribly afraid of rotting away while still alive = mangy dog: even my good friends will only pity me and write me off.
Fear of being disgusting, fear and the certainty that it is a revelation of my nature, of what I myself do not want to accept.

Second dream: Another skin disease, e.g. smallpox. People will immediately put me in isolation and be terrified that I could infect others, I will withstand the horrifying torments of the disease alone. Perhaps I will survive, but as a cripple, and people will shun and despise me. I will die a miserable, lonely death. Nobody can afford to take care of me or help me.

Third dream: I am strolling through the park with a gay fellow student; he is making good-naturedly bitchy jokes about me. On a pond I see a salamander, try to catch him, he dives away and another large, dangerous black creature from the mud is there. I notice the danger too late, and cannot pull my foot to safety, he snaps his jaws and I am lost.

It wasn’t hard to find gay men to interview. But what they told me about themselves and their sexuality had absolutely nothing to do with my experiences and utopias. They talked about who was fucking whom, sex in public toilets and in parks. I found it all rather depressing.

Lesbians, in contrast, remained hidden, I couldn’t find a single one. At any rate I gave up too soon, because the collection of names and phone numbers people handed me in those days included Ulla Naumann, as I see now. Apparently she had become famous for her coming out in the Action Council for the Liberation of Women, but I neglected to contact her at the time. Everything would have been different if I had. And so I gradually lost heart. Somebody suggested I try my luck with a personal ad in the St. Pauli Nachrichten. Finally I dared to enter the lesbian bar Sappho at the corner of Pariser and Uhlandstrasse, a nightmare. Women were supposed to meet each other here? Impossible!

The psychoanalyst Hubert Bacia was recommended to me as an expert on homosexuality. After a conversation with him I noted angrily that he “treats homosexuality as a purely scientific matter, without becoming engaged.” I groaned at all “the reading, the research I cannot bear on my own.”

Klaus Wildenhahn encouraged and supported me, but thought we needed to ask Helke Sander’s opinion of my project. She was not merely known for her speech before the German Socialist Student League (SDS) congress, but had also become an authority on women’s issues because of her commitment to anti-authoritarian preschools and her film on the birth-control pill. Helke received us lying on a sofa. She dismissed my “gay film” project as luxurious. I would do better to address real problems, and in order to do so she insisted that I read Werner Thönnessen’s book3 on Social Democratic women’s politics in the late nineteenth and early twentieth century.
I actually read the book and abandoned the topic of homosexuality, but joined the anarchist women. Shortly thereafter, Rosa von Praunheim made his film It Is Not the Homosexual Who Is Perverse, But the Situation in Which He Lives, a film that would help launch the gay movement one year later, in 1971.