We (about one hundred) women from the Berlin women’s center were taking a big chance when we rented a hall for 2,000 people in April 1974. This would be our first public women’s party. Instead of listening to songs by the Rolling Stones—such as “Under My Thumb”— women would play their own music for a change: The women’s party hosted one of the first appearances by Ina Deter (who still accompanied herself on the acoustic guitar in those days), and it was the premiere of the Flying Lesbians—the first women’s rock band on the European continent.

Up to now it had always been men on the stage. Men defined the mood, male bands fired up and excited the crowd, men had the power. It is hard to express in words what it meant to us women to see women—people like us—on stage: women blasting out rock riffs, pumping up the amps, bashing the drums and making the crowd go wild. 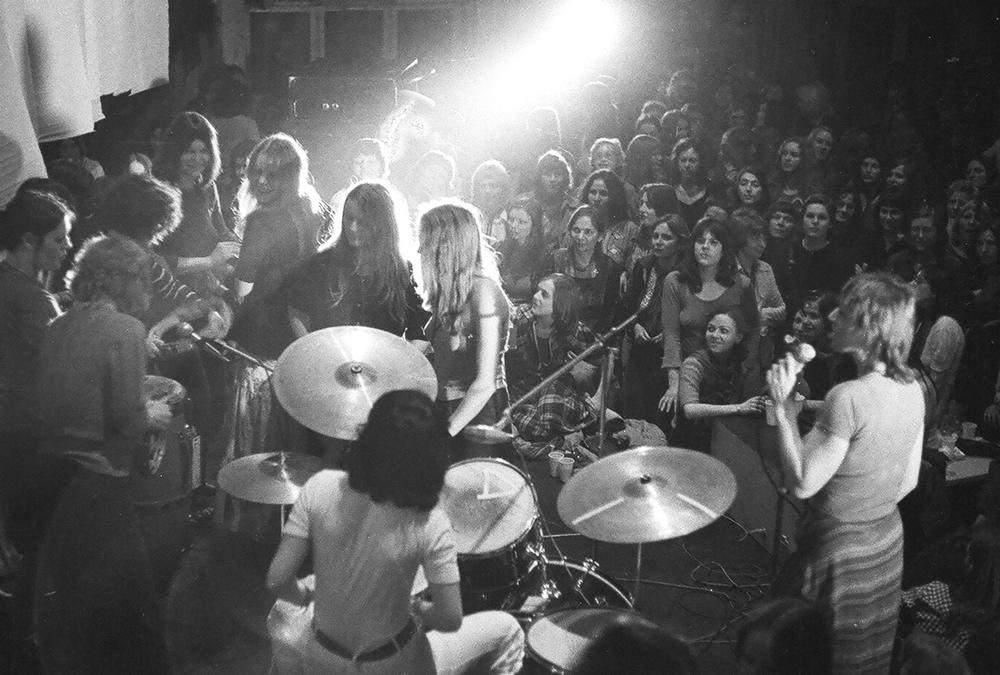 Women’s festival in the cafeteria of Berlin’s Technical University (TU) in April 1974. The crowd is drumming along with the band; at right, Monika Mengel, at the front in the audience Ina Deter. Photo: Cristina Perinicioli

On this evening women from the audience clambered up on stage and one after the other improvised their own personal blues songs, shouting everything out, and the audience screamed along with them, fascinated by the intensity of a communal musical life, akin to that of a joyful gospel congregation.

We had to guard the entrances; men kept trying to force their way in. At that time most men did not accept the idea of women going out on their own. Many women also doubted whether they would even have any fun at a dance without men, and were flabbergasted by this novel and dazzling experience.

After the great success of the first women’s party, we repeated the form and used it to publicize current topics such as the Tribunal Against Violence. The dance parties were not organized by a “festival group,” as would be the case after 1981. Each of them was a community effort, individual groups signed up for specific tasks and the profits went to the Berlin women’s center or other projects agreed upon in advance.

“Voice of the movement”

Cillie Rentmeister, who was active from the beginning in the Berlin women’s center and played keyboard for the Flying Lesbians, recalls the special significance of the women’s rock band for the women’s and lesbian movements. What follows is a montage of quotations from her article “Frauenfeste als Initiationsritual – Die Flying Lesbians spielten zum Tanz der freien Verhältnisse”[i]:

The Flying Lesbians in fact became touring lesbians at lightning speed. What other rock band ever formed over night, rehearsed twice and then played to a crowd of 2,000? And three months later to an audience of 30,000 abroad?[ii]

… The Flying Lesbians functioned according to the same principles as other women’s groups, they wanted to be a collective, egalitarian, everybody was supposed to do everything; everybody was supposed to master the musical techniques, carry the equipment, solder the cables, drive the trucks with equipment across the country, set up for the festivals and—usually long after midnight— break everything down again and drive to the next gig in the morning. This was all part of being liberated from male assistance. And: everybody was supposed to be allowed to improvise, write lyrics and compose, and as a consequence, all the members melded for copyright purposes into the pseudonym Emily Pankhurst… At any rate five women provided the lyrics and four of them also sang solo.[iii]

Poster for the Tribunal on violence against women in gynaecology, psychiatry, marriage, at work and in the media. The photo shows Emily Pankhurst beeing carried away by policemen.

Our “own music” was certainly not the strength of our amateur band, nor was it our main objective. We always understood ourselves—with a slight ironic undertone—as a “good mood band.”

On the other hand, some reviewers also treated musical ideas individually; writing in the US radical feminist paper off our backs, Miriam Frank noted one important stylistic difference: The Flying Lesbians are the German women’s movement expressed in music. Each song reflects an important idea, criticism or problem that is being worked out now in the project collectives and women’s centers of West Germany, or that is being argued about in women’s bars…The blatantly lesbian songs by the Flying Lesbians are surely different from the cozy sweetness of the last few years in American Lesbian music. They’re refreshingly aggressive and controversial….”[iv]

We helped people to come out… For example, we said our names at the festivals, introduced ourselves as lesbians, and our drummer always said that she wasn’t a lesbian. That was important! We were radical in our representations, but not in the sense of distancing ourselves from straight women![v] 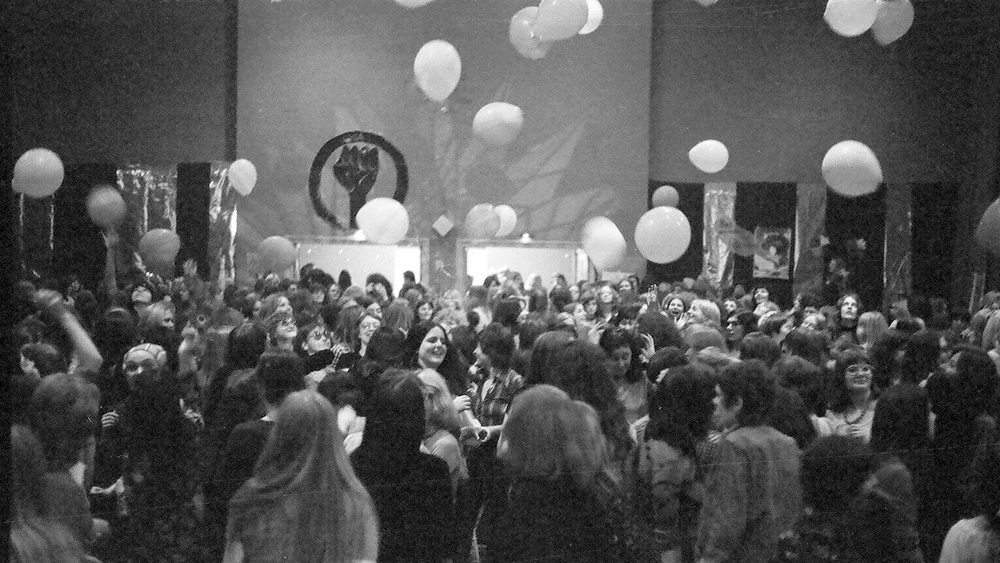 A rite of passage

As a scholar in cultural studies, Cillie Rentmeister found in the women’s festivals all the marks of a rite of passage, and writes:

What is a rite of passage? Rites create and affirm identity and help to unite and affirm groups; rites of passage and initiation accompany and shape the “crisis” of transition to a new identity, a new group or a new status.

According to Arnold van Gennep’s classical theory, the transformation one experiences in a rite of passage falls into three phases:

The label “Women Only” proved provocative in the positive sense of the word. Women detached themselves from the male and “mixed” world and entered a women-only space. Many women came who would normally never have entered a women’s center. Heterosexual women had a reason—or an excuse—to go to a party without (their) men.

The invitation from the women’s center played on this freedom:
“We know from personal experience that we behave more freely when there are no men around. So women, come to this evening on your own. (If HE really cares for you, he will understand.)”

In the narrower sense, entering the party venue marked the liminal state, the walk over the threshold, the 50 or 100 meters from the ticket table to the hall. In the figurative sense, this state could naturally persist in the presence of ambivalent emotions. Newcomers often felt a certain disorientation at first, confusion and agitation: straight women were confronted with lesbians, there was a sense of possibility in the air, but also of vague anxiety and excited curiosity.

Over the course of the evening, newcomers were welcomed and incorporated into the whole “women together are strong!” atmosphere, the harmony of the partygoers, the community of the women’s movement. On these evenings, people left the conflicts that existed in the groups outside the door of the venue. New women were integrated, the program mix ensured that there was something for everyone…

According to the cultural anthropologist Ina-Maria Greverus, “true rituals” are characterized by a process of the dissolution of boundaries.

In fact, at the women’s parties and festivals there was a partial dissolution of the boundaries between spectators and performers, audience and stage, especially late at night, when—however only at the early parties, later we feared for the instruments—women stormed the stage en masse to drum along and sing their own songs. Everybody was allowed to take the microphone or the keyboards. Women in the hall drummed on every conceivable object.

Monika Savier recalls: “The line between the audience and us was abolished. For us this was confirmation that the crowd accepted us.”

At one of the later festivals, and with a different band, she remembered the festival-goers beating on bottles and glasses as if in a trance until everything burst, and they finally found themselves sitting happily in a room strewn with shards.

The size of the parties and festivals, the crowd, the fact that one or two thousand women had come together, contributed to their function of affirming identity. The participants looked in this mirror and saw “we are women, we are many…” 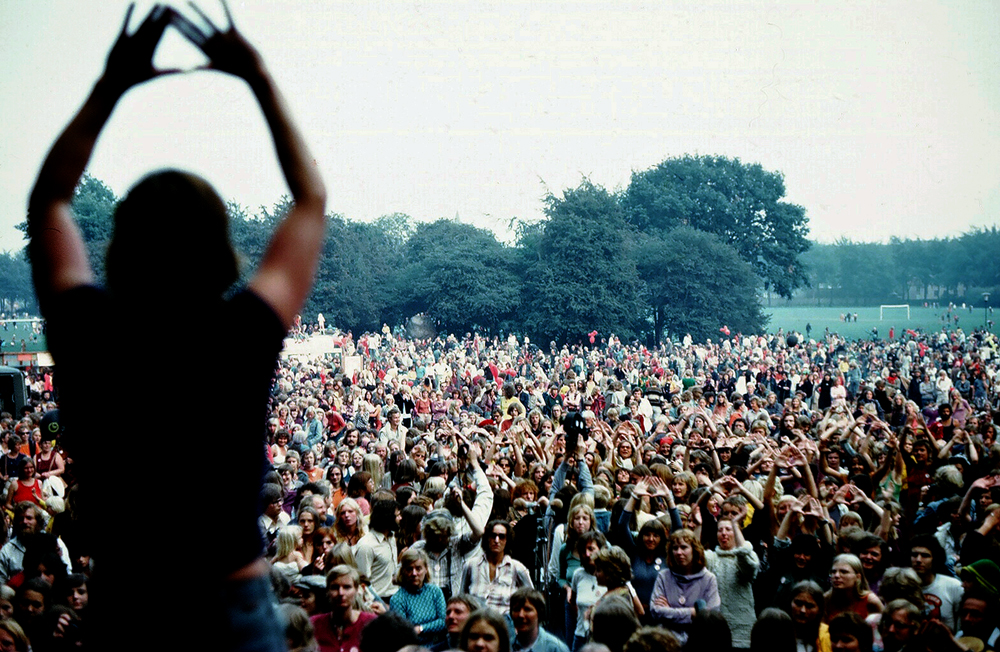 The “accessories” of a classic rite of passage can also be identified:

After the party: Back to the male world

In her article in Spiegel magazine, “The Great Softness Ruled: On the First Public Women’s Festival in Berlin,”[vi] the journalist Sophie Behr describes her feelings at the end of the party, the return to the world that she, as a “normal woman,” suddenly experienced as a male world:

Parties without men certainly won’t work in the long run. And yet, as a normal woman driving home through the deserted big-city streets at three in the morning, the world is still in order. Even at this late hour it is overpoweringly defined and made by men and thus suddenly alien….[vii]

The festival as coming-out party

The women’s festivals made tangible the importance of separatism, of male-free spaces, for the dance of liberated life [the German original, Tanz der freien Verhältnisse, is a play on words since “freie Verhältnisse” can mean both “liberated relationships” and “liberated conditions” more generally]: to be able to dance without gawking men, half dressed, to get drunk without danger, to present or experience eroticism, and to realize how much fun one can have among women.

Women’s festivals were in many senses coming-out parties. The term comes from the USA and refers to debutante balls where young women about to enter adult sociability are introduced to [high] society.

Women’s parties and festivals were where women’s society and women’s culture formed. Here women from various scenes entered women’s (movement) circles for the first time—women from socialist groups, students, white collar workers, artists and also women from political parties and trade unions, and presented themselves in a female public space.

Straight women encountered lesbians and vice versa. Lesbians emerged from their hiding places in the bars, in the provinces, in isolation and left behind the notion that they were the only ones around. “They could present themselves with self-confidence on the dance floor!” (Monika Mengel). 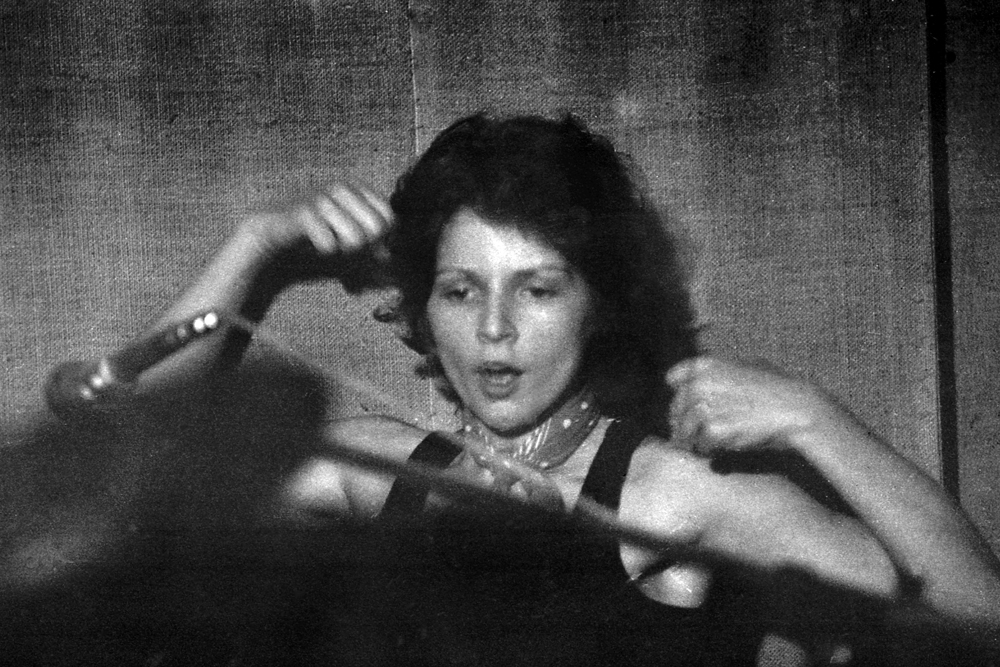 Cillie Rentmeister at the piano with the Flying Lesbians in Kreuzberg in September 1974. She not only played keyboards but also sang, wrote lyrics and composed the music. As this text shows, she also analyzed its cultural significance. Photo: Cristina Perincioli

Our name—proud self-definition rather than accusatory label—was also part of liberation and coming out. We wanted to make the term “lesbian” visible and audible, with fun and pleasure and a playful circus reference. The band name was incidentally also a deliberate challenge to event organizers. Some of them were quite reluctant to put it on the poster in big letters.[viii]