In 1998, on the thirtieth anniversary of 1968, the media showcased the spokesmen of the time: Rudi Dutschke, Bernd Rabehl, Knut Nevermann, Rainer Langhans and Horst Mahler. They accorded them hours of broadcasting time for their mainly negative assessment of 1968. The following chapters describe the 68er movement from the perspective of a woman, a first-year student from the countryside: Not from above, but from below. The events at the German Film and Television Academy in Berlin (dffb), where I began to study in 1968, illustrate on a small scale what moved students in those days and how the ‘establishment’ reacted to them. Film technology was also taking giant strides at this time, thereby opening up new ways of working in documentary cinema. Simultaneously, a freshly awakened social consciousness discovered the medium’s political dimension and expected a politically aware use of this expensive, exclusive and powerful instrument from filmmakers. The chapters in Part 1 reflect both the political movement and the development of the medium.

The Film Academy as a Battleground

The German Film and Television Academy (dffb) in Berlin is a small, elite educational institution (with 18 students admitted per year out of 500 applications in those days), organized as a limited liability company (GmbH) responsible to the board composed of members of the Berlin Senate (city-state government) and the Federal Ministry of the Interior. In its third year of existence in 1968, it was headed by a directorate consisting of Erwin Leiser and Dr. Heinz Rathsack. They alone decided on the curriculum and appointed instructors, who at that point were still all men. The students were dissatisfied with the teaching and protested, which the directors and some instructors was unseemly and unheard-of behavior. The fronts hardened. Helene Schwarz played an important role in resolving the situation. 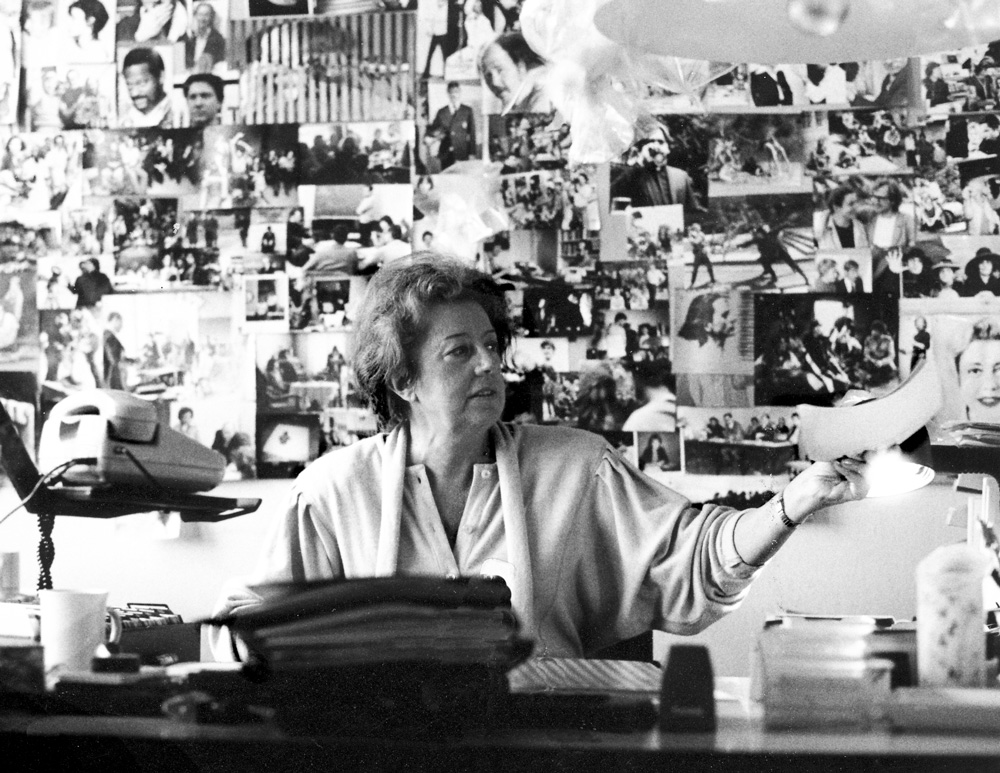 Helene Schwarz 1978 Foto: privat At the time she was a secretary responsible for all of the concerns of students and instructors, since there was as yet no director of studies. She recalls:

I thought about what to do and one evening invited almost all of the instructors to my home—the film festival was on and everybody was in Berlin: Johannes Schaaf, Christian Rischert, Michael Ballhaus, Ulrich Gregor—not the two directors, but a few students instead: Harun Farocki, Hartmut Bitomski, Holger Meins and Gerd Conradt. There was a long discussion and the instructors warmed to the students’ ideas. Finally, Ulrich Gregor suggested founding an academic council with one-third students, one-third instructor and one-third administrative representation. Thus the idea of one-third parity was born in my apartment, which makes me happy and proud, it was a tool that has worked very well to this day.

The instructors ultimately pushed through this suggestion, but at the same time had to prevent the dismissal of Helene Schwarz. In a sort of anticipation of later developments in higher education, she had intervened in policy as an employee of the institution. When the director Dr. Rathsack found out that this plan had been devised on her initiative he summoned her to his office and said:

A further point of conflict was the question of whom the

The arrogance of militant activists/ Civil rights suspended/ How did the Radikalenerlass work?   The period when the Berlin women’s center was founded was marked by terror, and this terror assumed a number of guises: many women’s center activists knew there was no point in applying for a public service job after completing their studies[...]

“Propaganda of the deed”/ Historical anarchism, my grandfather as an example   At right (seated) Etienne Perincioli with his colleagues in Montreux in 1902. Photo: Private collection   What is anarchism? The term has consistently been used as a pejorative— depicting anarchists as insurrectionists, a black bloc, bomb plotters and terrorists. But anarchism is primarily[...]

A Berlin women’s group issues a call to arms in Agit 883, refering to Solanas, Mao and Castro   In the chapter Militant Women, I refer to the following appeal by the Women’s Liberation Front in the newspaper Agit 883 no. 56 of April 16, 1970. Here is an abridged version of the document[...]