We called the encounter groups that we formed at the women’s center “CR groups,” after the method we had adopted from the US women’s movement. At each session, a group member had the opportunity to talk about her situation, and the questions posed by the other women helped her to better understand her own circumstances, biography and relationship patterns. These CR groups were incredibly important because they showed every woman that she was not alone with her experiences.

In our interview, Cornelia Mansfeld stressed the absence of ideology in the CR groups:

There were groups for beginners where each woman had a session to herself. On that day, she was the only one to tell her story, then there was a discussion and we put things in a general context. If the women were more advanced we chose a topic and each contributed her experiences. The socialist women criticized it as superficial if women stopped coming after a CR group. We didn’t see it that way, though: “She’s simply taking what she needs.” We didn’t judge.

In Frauen gemeinsam sind stark – Texte der US-amerikanischen Frauenbewegung,[i] an anthology of American feminist texts from the time, Chude Pam Allen describes quite wonderfully why this was so important for us.

I discussed this text with students in the 1980s, but they found it hard to understand what was so special about being able to communicate with other women this way. I had to explain to them how few opportunities women had had to discuss their experiences up to then. And that may also explain why there was such a mood of optimism and freedom, because women claimed spaces they could shape themselves, that was the exciting thing and the consciousness-raising groups played a key role because they allowed us to free ourselves of all these political norms and values and focus on our own life experience.

Monika Schmid acknowledged the positive effects of the CR groups:

They gave rise to a network of friendships because we knew each other very well, could rely on one another, women were creating something for other women, taking each other seriously, nobody bitched about anybody else, as they might in a communal apartment— whatever happened, you could bring anything up in the group and discuss it. Projects emerged from this: I helped found at least five associations. The first was Counseling and Information for Women (BIFF)[ii] and the second was Psychosocial Initiative for Women (PSIFF). The women involved were mostly psychologists who were able to create jobs for themselves this way.
The motto was, “The personal is political.”[iii] 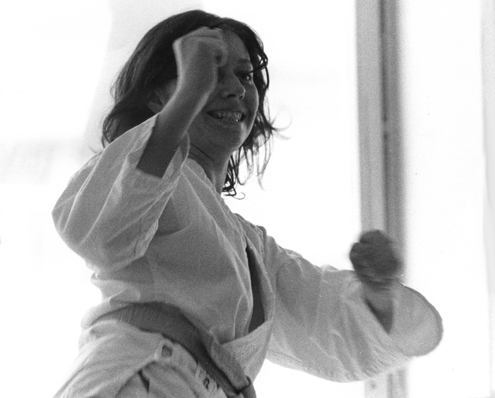 This essay was a revelation to me when I read it in 1970: I was a baby dyke in those days, living with the feeling that I was only half a woman and not quite right, not yet “mature” according to Sigmund Freud. The paper showed that you couldn’t feel anything when you were vaginally penetrated because there were barely any nerves there. “So stop bothering with it, the clitoris is what counts!”
It gave me an incredible boost to know that no man was needed, since the main event was happening somewhere else anyway.

This text explained my inability to have a vaginal orgasm. It was an amazing revelation. It was true for me; in my whole life I had never experienced a vaginal orgasm. And I am happy that it became possible for our generation to finally accept a clitoral orgasm as a part of “adult sexuality.” There were lots of discussions with other women who had, and defended, vaginal orgasms. They had to explain to us how it was technically possible.

In 1974 we went on a camping trip with the Falken.[v] Naturally we had a women’s tent, and in there we read aloud from the “Myth of the Vaginal Orgasm” and then twenty of us masturbated together. It was a great experience. And so we turned this alleged deficit into something positive. The other book we read was Eltern, Kind und Neurose (Parents, Child and Neurosis) by Horst-Eberhard Richter, a study of the madness of the nuclear family.
Then came the speculums. I did a lot of self-exams.

[iv] Wilhelm Reich, Die Funktion des Orgasmus. Die Entdeckung des Orgons (1942; Cologne, 1969). Pirate editions of the book appeared in the late 1960s. The work was also published in English in 1942 as The Discovery of Orgone, vol. 1: The Function of the Orgasm, trans. Theodore P. Wolfe. For more on the reception of this work at the time, see the chapter Sexual Revolution?